Buoyed by the Supreme Court’s decision and global Pride celebrations, the internet was flooded with color.

As anyone with a Facebook account can attest to, this weekend saw rainbows sweep across the social media site. In honor of Pride, and in anticipation of the Supreme Court’s marriage equality decision, Facebook developed a program to allow users to quickly and easily add a rainbow filter to their profile images. Originally created by two interns, the company saw the concept’s promise and streamlined the process.

The reaction was nothing short of viral, with more than 26 million people across the world turning their profiles into visible statements of LGBT pride and support. So far the photos received more than half a billion likes and comments, and the momentum shows no sign of slowing down.

Among the millions were a number of familiar faces, with stars like Leonardo DiCaprio, Elizabeth Banks, and Arianna Huffington taking part. Arnold Schwarzenegger had a particulalry memorable encounter with an anti-gay fan: 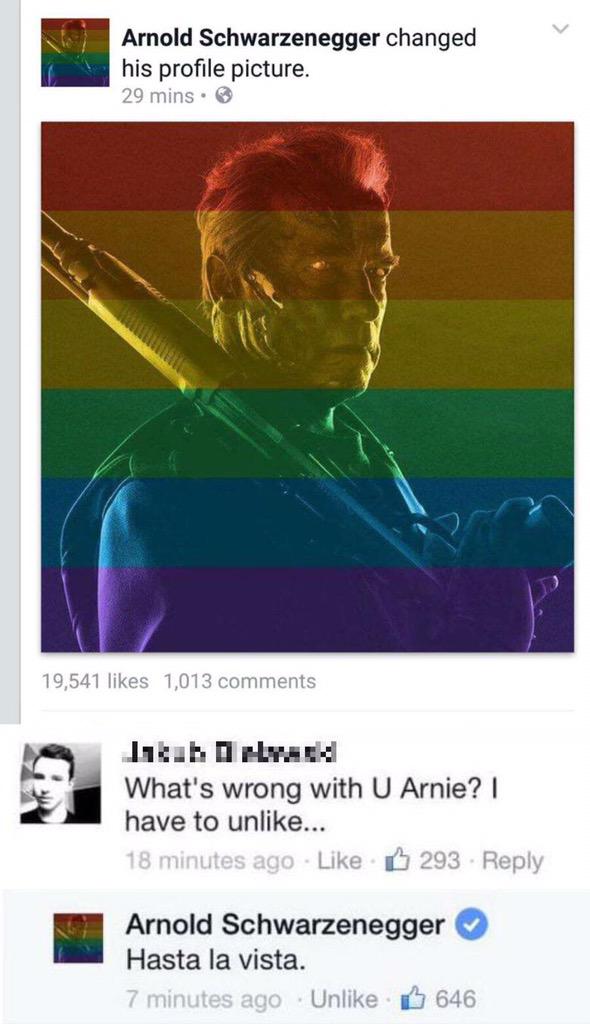 What Does the Northern Ireland Assembly Know on Homosexuality?
BACK IN THE U. S. S. R. - an article from March 1991
Evangelicals and LGBT unite...
Ofcom: LGBT commitments
Breaking the Gay Code in the Movies
Homophobic mobs attack LGBT people in Kenya with impunity
A neo-Nazi group in Ukraine have destroyed an LGBT+ organisation’s office and almost killed a man in the process.
The National Union of Students (NUS), Lesbian and Gay Liberation Campaign Conference 1988
0 replies