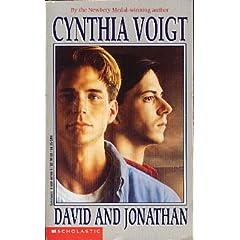 This is an intriguing book covering the relationships of three people – all male. The story shifts from the present to the past in a series of flashbacks, showing the relationship of the two surviving characters, and their interdependence on each other.

The central figures are Jonathan and Henry, friends in a small American town growing up, sharing experiences, yet separated by the divide of their different religious backgrounds and physical and mental abilities and aptitudes.

Into this relationship is thrown a wild boomerang. A person who is so different that he completely upsets the natural order of Jonathan’s family, and thus Henry’s relationship to it. Jonathan and Henry grow apart – or are forced apart by David the interloper. Yet no-one can see or will admit that David really needs outside help. Ultimately David is lost, but Jonathan and Henry cannot seem to put him away – he always seems to be there, an intrusion into their present and future.

The time span is from post Second World War to Vietnam. It does not try to tackle either of these two issues, except to say that the trauma that affects David, his sense of not belonging could just as easily be applied to the returning troops of the Vietnam action.

The book is well written and captures the period in question and its ambiguities. Anyone growing up during this time span will readily understand the story, its characters and the sense of prevailing loss that still exists.