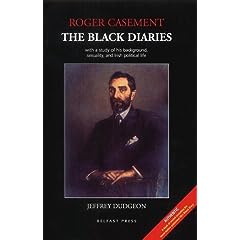 diaries, from 1903 to 1911, the gay cruising areas in Belfast were at the Albert Clock (probably also around the Customs House toilet), Botanic Gardens, Ormeau Park, and the Giants Ring. Cottaging went on in Victoria Square in an elegant wrought iron edifice (which was still operating in the 1960Seand may be in the Ulster Folk Museum) and at the Gasworks.

From then until after the 2nd World War, the GNR station in Great Victoria Street and DuBarry’s bar at the docks were recognised haunts, the latter, as in other cities, being shared with prostitutes. The blackout from 1939, and the arrival from 1943-44 of 100,000 American troops in Northern Ireland had a huge impact and special place in gay memories.

The Royal Avenue (RA) Bar in Rosemary Street (the hotel’s public bar, opposite the Red Barn pub) as portrayed in Maurice Leitch’s fine 1965 novel The Liberty Lad (probably the earliest description of a gay bar in Irish literature) was the first in the city. It operated from some time in the 1950s being shared at times with deaf and dumb customers who often occupied the front of the bar. The two (straight) staff in the RA ran a tight but tolerant ship. Two lesbians, Greta and Anne, were the only females who in the 1960s were regular customers. At that time and until the end of the 1970s, pubs closed sharply at 10 p.m.

When the Royal Avenue Hotel was on its last legs due to the troubles, Ernie Thompson and Jim Kempson (who have both recently died), from 1974, ran, in its elegant ballroom, Belfast’s first ever and highly memorable discos in Belfast (probably the first in Ireland).

After the Royal Avenue closed, the Casanova Club (prop. Louis Wise) in Upper Arthur Street (presently part of the British Home Stores site) flowered briefly until bombed by the IRA in c. 1976.

Meanwhile the Gay Liberation Society (GLS) was meeting at Queen’s University Students Union from 1972 with significant town as well as gown membership. Initiated by Andy HindSeand Martin McQuigg it was taken forward by Dick Sinclair, Maeve Malley, Joseph Leckey and Brian Gilmore. Later from about 1975 until the early 1980s it ran highly successful Saturday night discos in the McMordie Hall, attended by up to 300 gays (and indeed many apparent straights). Key helpers included Kevin Merritt, Billy Forsythe, John McConkey, and Michael McAlinden. This was at a time, during the most brutal years of the troubles, when there was next to no night life in the city and only gays ventured out.

Cara-Friend www.cara-friend.org.uk started its befriending and information operation as a letter service in 1974. After a brief telephone service at the Students Union which ended in the switchboard collapsing, it moved on to a permanent telephone service in about 1976, operating first from Doug Sobey’s flat in Ulsterville Avenue (Doug is still a Cara-Friend officer after 30 years). Lesbian Line and Foyle Friend developed later. Cara-Friend was grant aided by the Department of Health and Social Services, at Stormont, from as early as 1975.

NIGRA started in the summer of 1975 when USFI became corrupted. Early NIGRA Presidents have included Dr Graham Carter (who sadly died young), former life-President Richard Kennedy, and Tim Clarke ably supported by Sappho sisters Geraldine Sergeant and Maureen Miskimmin. A noticeable number of NIGRA officers married and had children which was baffling for some: The Strasbourg case taken by J eff Dudgeon to the European Court of Human Rights, which in 1982 ultimately resulted in the ending of life imprisonment for gay men, was started by NIGRA in 1975. P.A. MagLochlainn, current NIGRA President, has filled the post longer than any of his predecessors.

From about 1975 until the early 1980s Gay Lib (OLS) met in No. 4 University Street, a large house loaned by the university, where Cara-Friend had a room with a telephone cubicle. It was in constant use for regular Thursday meetingSeand parties. From there was organised the successful case at the European Court of Human Rights in Strasbourg against the British Government funded by the Queen’s discoSeand the singer Tom Robinson. 1976 was also the year of the gay raids when all the NIGRA and Cara-Friend committee were arrested and the Director of Public Prosecutions (DPP) decided to charge Jeff Dudgeon, Doug Sobey and Richard Kennedy. Only a political intervention forced the DPP to drop the cases in 1977.

The Strasbourg case took seven years to go through the court and was won in 1981 when the UK was found guilty of a human rights violation. This was because it criminalised all gay male sexual activity with a possible sentence of life imprisonment for buggery, and two years jail for any other sexual act (“gross indecency”) thereby interfering with the right to a private life. A year later a reluctant British government pushed an Order in Council through Westminster legalising certain gay sexual activity with an age of consent of 21.

The Chariot Rooms in Lower North Street was the first gay-run bar in Belfast, which was operated successfully, and with flair by Ernie and Jim in the darkest years of the troubles. It had its own disco. The reasons for its closing are obscure although it was well frequented. It is now the site of the NI Human Rights Commission.

Lost Language of Cranes: The Devil's Advocate Bullying and Suicide
%d bloggers like this:
Scroll to top