Blog
You are here: Home / Blog / Anti-Bullying & Homophobia / Over the River With Two Dads: An Interview With Author Linda Ashman

Our daughter received her annual birthday greeting and gift of $10 from the Toy House here in Jackson, MI. It’s one of our favorite places to shop as it’s a local, family-owned business plus they have really cool stuff for both kids and adults alike. While Anna ran around ringing the birthday bell and posing for her picture for the November birthday wall, I took a moment to check out the new books in the store’s book section. The holiday books were pushed to the front and one caught my eye. It was Linda Ashman’s Over the River & Through the Wood: A holiday adventure. We sing the song to our kids as we have to cross either the Maumee River or the St. Joseph River to get to either one of our parents’ house each holiday.

I was pleasantly surprised to find a same-sex male couple with kids as one of the family groups as I read and followed along with the story line. The owner of the store came by and I pointed out the couple and he laughed. I cautioned him that in our rather conservative town (one of the allegedly birthplaces of the Republican Party) this type of family might not fly. He shook his head and asked me how many copies of the book I wanted.

I decided to do my homework and sniffed around on line for the author. I found her on social media and asked her if she wouldn’t mind chatting about the book, its genesis and the gay dads. This is our chat:

Hi Linda! Thanks for taking my questions! You included a same-sex couple with kids in your book, why? Was this in the works prior to the SCOTUS ruling last June or was it there all along?

The book got its start three years ago when my Sterling Publishing editor, Meredith Mundy, asked me to write a contemporary take on this classic holiday song. As part of the update, we felt it was important to show a modern family — one with a variety of family types, including a same-sex couple with kids. So, yes, the book was in the works well before the Supreme Court ruling (the journey from idea to published picture book is a long one!).

Yes it is! My book took several years from idea to publication. I noticed that the other families in the book look diverse as well. The one couple appears to have two children of Asian descent. We can assume that they were adopted?

Yes. We wanted the characters to be diverse in multiple ways so that lots of kids (and adults) would recognize themselves and their families in the illustrations. The story involves four far-flung siblings and their families making their way — by various means — to Grandma’s house. In addition to the family headed by two dads, there’s a biracial couple and their child, a family with two adopted kids and a couple with three kids and two dogs.

Both of my nieces were adopted and they are African American. I am totally getting them this book for Christmas! So were you prepared for the negative criticism and reviews that you shared with me in our initial chat on Facebook?

So far, I’ve seen just one negative comment: A reviewer on Amazon considered it “inappropriate” for his toddler. While I wasn’t completely surprised by that sort of response, it still caught me off guard. It’s hard to understand how a story about a loving, inclusive family can be considered inappropriate.

I am so very sorry for him and his kids. Sigh. So much work to do! Have there been any positive reviews or comments

Yes! Aside from that one isolated comment, the reviews have been extremely positive. Publishers Weekly gave it a starred review, and other major publications — Kirkus, School Library Journal, and Booklist — have all praised the book and the diversity of the characters. In addition, the personal feedback I’ve received from readers — especially those who see themselves reflected in the book — has been especially gratifying.

By the way, what is your own experience with same-sex couples? It appears that you and your amazing illustrator have some as you’ve nailed the look. (Urban setting, snappy glasses, etc.). 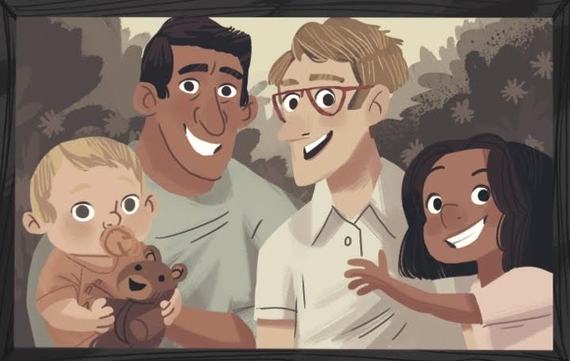 Well, thank you on behalf of Kim Smith, the book’s fabulous illustrator. Kim and I both have a number of gay friends, some single and some married, and few of them fit any sort of stereotype. Many years ago, I shared an apartment in Los Angeles with my friend, Paul, who is gay (and is now married to his longtime partner). My son has grown up with kids with same-sex parents and doesn’t think twice about it. I like to think his generation is a little more open-minded; let’s hope so.

True, and with SCOTUS back in June, we’re quickly becoming the new normal. My kids will now ask if a same sex couple is married. That is something I never would have considered when I was a kid. So how does this book/story relate to your own family’s holiday traditions? Why did you choose to write about this time of year?

Like the characters in the book, my husband and I have family members scattered across the country. Since we’ve moved a fair amount — from Los Angeles to Denver to Chapel Hill — the gathering place tends to change from year to year. This year we’re going to a friend’s house nearby — no long journeys involved!

It must be the year for that as we’re staying local as well. Although my husband’s father is a retired chef, I always look forward to holidays at their place. Speaking of, for many LGBT folk, the very thought of the holidays induce great amounts of stress and angst. However, aside from the travel issues that are germane to the story line, the gay couple seem pretty at ease with the family event. Were you aware of the stress that many of us feel this time of year?

The holidays can be hard for so many people — we all dream of those harmonious Rockwellian gatherings and, for most of us, that’s not the reality. I imagine the anxiety and tension are that much greater for LGBT folk, especially if they feel they can’t be who they are around family members. A friend of mine was unable to tell his parents he was gay until well into his 30s — so some of the people at holiday gatherings knew, and some didn’t. Very stressful.
But you’re right — the gay couple here is clearly part of a loving family in which people genuinely like and respect each other. The beauty of picture books is that sometimes you get to create the world you want to live in.

So were you intending to normalize the same-sex family or just present them as is… without agenda, without comment, without a story?

Another thing I love about picture books is that the illustrations convey so much meaning — you don’t have to spell everything out in the text. So, through the illustrations, readers take in this beautiful, happy family — and, oh, by the way, those kids have two dads, and not everyone seems to be the same color or ethnicity. So, yes, I wanted the two-dad family to seem unremarkable — like the other families in the book. I also hoped that kids who don’t often see themselves in picture books might see themselves and their families here. When I read the book to a friend’s daughter, she pointed to a family portrait in one of the illustrations and asked, “Who took the picture?” It was a good reminder that, to young kids, the characters in books are real. So when kids see all sorts of diverse people and family configurations in their books, it becomes a little more ordinary when they see them in real life. And maybe that leads to more understanding and inclusiveness for everyone. I hope so.

So what are your plans for the future?

Our son goes off to college next year, which feels like a seismic shift in our normal routine around here. Not sure what it will lead to, but I’m trying to stay open to the possibilities. In the meantime, I’ve got more books coming out in the next few months, and more writing projects in the works.

Linda, thanks so much for chatting with me! Enjoy your holiday!

You can find more about Linda and her book here: http://lindaashman.com/about-the-books/over-the-river-and-through-the-wood/

Images reprinted with permission from Over the River & Through the Wood © 2015 by Linda Ashman, Sterling Children’s Books, an imprint of Sterling Publishing Co., Inc. Illustrations by Kim Smith.