Jeffrey Edward Anthony “Jeff” Dudgeon MBE is a Northern Irish politician, historian (his books on Roger Casement are extremely well researched and very readable)  and gay political activist. He currently sits as a Ulster Unionist Party councillor for the Balmoral area of Belfast City Council.  He is best known for bringing a case to the European Court of Human Rights which successfully challenged Northern Ireland’s laws criminalising consensual sexual acts between men in private. He is currently one of three openly gay politicians elected to the City Council along with Mary Ellen Campbell of Sinn Féin and Julie-Anne Corr of the Progressive Unionist Party

The following extract from an interview in The Irish Times, gives an insight into Jeffrey, who he is and what he has become…

“I’ve always been a reformer. A rebel and a radical, yes, but I wasn’t a revolutionary,” Dudgeon says, looking back on his 1981 victory in the European Court of Human Rights, which decriminalised homosexuality in Northern Ireland.

What was life like, as a young gay man, before the Strasbourg win? Dudgeon sums it up in one word: isolation.

“I knew all about homosexuality, and by my midteens I had ascertained that fact about myself. But I just didn’t know how to meet other people, and I was petrified at the thought of it. You just couldn’t say the words to anyone.”…

In the video below Ciarán Ó Brolcháin discusses with author Jeffrey Dudgeon and Dr. Margaret O’Callaghan the book – “Roger Casement: The Black Diaries” which explores the life of Roger Casement – a study of his social background, political life and his contribution to Irish political life.

A gift of childhood is the distinct lack of self-awareness. You’re alive, but you don’t contemplate ‘life’. One happy day becomes the next, until suddenly; your hitherto unknown differences are thrust upon you. Once a child, now a black child. You believed you were essentially the same as all the other kids in class, skin colour notwithstanding. The teacher picks on you, and Joel, and Emmanuel, for doing things you see everyone else doing. It takes a while to put the pieces together. Negative certainly, but the sense of kinship, the shared outrage at your bad treatment, is a silver lining. You’ll get past poor treatment, because you’re in it together.

Forward 10 years, and society not being content with one box, sees fit to squeeze that airless cardboard cube into another. You’re now aware you’re a gay black child. Joel and Emmanuel leave you for dust, having to fight against notions of their violent masculinity, or worse, fulfilling the prophecies. You’re on your own.

To dwell on What It’s Like to be at an intersection of various oppressive constructs is to dance with depression.

Predictably, racism is as rife here as it is anywhere else. We didn’t need a survey, when on Grindr and other such ‘hookup sites’ the bastardised ‘No Dogs, No Blacks, No Irish’ signs are listed next to long walks in the park, good senses of humour, and proclivities towards extra-large penises.

You turn to your racial kin, but they’ve decided you have wantonly emasculated yourself – something colonialists did through slavery – and you are thus now on the side of ‘the enemy’. Too black to be humanised by white LGBT, too white to be embraced by the Black community [Gayness, according to some Black academics, is a White plot to kill the black male, and by corollary, all black people]. Ponder for a second, the conflicting message a black gay man such as myself contends with: In the gay community, you’re a hyper-masculine thug, in the black community, you’ve wilfully feminised yourself.

The black community is not more homophobic than any other community. Homophobia is a colonial throwback to a time when the bible was handed to the oppressed with one hand, and the books taken from them with the other. You see more homophobic laws in countries touched by colonialism because there was no time to ponder ancient and well-established gender or sexual fluidity, not when backs were breaking in the fields. Such ignorance is clung to, because where do you turn if you give up on all you were taught? Can old dogs learn new tricks? Is decolonisation of the mind even possible?

This all-encompassing barrel of contradictions is something those of us at such intersections must ponder regularly. It’s bad enough as a man, so to imagine how black lesbians feel, or black transpeople feel, is to dance ever strenuously in that quagmire of depression. Perhaps this is why it’s easier for mainstream media to ignore the issues altogether. Writing about whether Ukip should be allowed to pride is easier than contemplating the pain PoC face when we see extremist viewpoints being normalised and celebrated (for Pride is a celebration). It’s easier to pontificate on liberty and argue for free speech, than it is to discuss another of those freedoms, the Right to Assembly, and whether PoC feel safe enough to assemble when faced with people who do not want us and our families around.

I suppose we have to remember that beauty and strength reside in us. The rejection, the juggling of toxic balls, the hatred; those things are external. On a subconscious level, we know that hatred such as racism is borne from fear, jealousy, and ignorance. I used to be torn between feeling like I had to choose one or the other: be gay, or be black. To be one was to let the other side down. The knowledge that the two aren’t mutually exclusive was as shocking as it was simple. I am me. You are you. No-one can remove our sense of self without our permission. Don’t forget that, and celebrate your existence!

As a youngster I  always listened to music, whether it be listening hidden under the bed clothes on my transistor radio on headphones to Radio Caroline, or Radio 2 and Radio 3, or when I was doing my homewor;  I have not discounted Radio 4 for it had things like the Navy Lark, Round the Horne, The Goons, Alistair Cooke’s Letter from America etc.  Today I am still a devotee of radio in all its forms, and I have it setup on my laptops, tablets, phone and I also have a smal digital portable radio and a Sony Walkman which is now over 10 years old and still working perfectly. 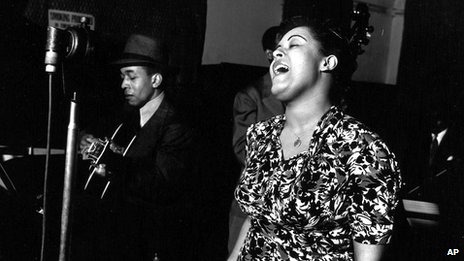 Over time my musical tastes have widened to encompass jazz. Of course, I don’t like all jazz, I’m not a fan of Dickie style jazz, or jazz that seems to forget the rhythm (if it ever had any to start with). But I love the jazz you associate with speakeasies, those smokey havens of people who were keeping low and hiding away from the world.

But, I hear you ask, what has this to do with the LGBT community? As a society we often feel that we are unique in how we have been persecuted; but as I delve into the history of jazz and its performers I am dismayed to see how often music and musicians have also been targets of a society that just didn’t understand. Indeed, quite often jazz has also been seen as a scapegoat for society’s ills.
This was brought home to me again by an article on Billie Holiday – The War on Billie Holiday, by Johann Hari. In his article he writes how the Treasury Department in the USA told Harry J. Anslinger (head of the FBI) he was wasting his time taking on a community (jazz) that couldn’t be fractured, and that their efforts would have a far greater impact if they focused on a single target – someone well-known, like Billie Holiday.
The result of this unjustified targeting, was that Billie Holiday was sent to jail, and as a former convict, she was stripped of her cabaret performer’s license on the grounds that listening to her might harm the morals of the public. She wasn’t allowed to sing anywhere that alcohol was served—which basically excluded her from every jazz club in the United States.
So how does this reflect the bias and prejudice that we in the LGBT community experience today? I print an excerpt from the article:
‘Harry Anslinger was told that there were also white women, just as famous as Billie, who had drug problems—but he responded to them rather differently. He called Judy Garland, another heroin addict, in to see him. They had a friendly chat, in which he advised her to take longer vacations between pictures, and he wrote to her studio, assuring them she didn’t have a drug problem at all. When he discovered that a Washington society hostess he knew—“a beautiful, gracious lady,” he noted—had an illegal drug addiction, he explained he couldn’t possibly arrest her because “it would destroy … the unblemished reputation of one of the nation’s most honored families.” He helped her to wean herself off her addiction slowly, without the law becoming involved…’
I know, society was different then – prejudices and phobias were the rule rather than the exception. But it’s a fact: we in today’s LGBT community are being targeted in similar ways with the same element of prejudice. Even today, in various parts of the world, gay people are thrown off high-rises, beheaded, lynched and stoned to death, lashed, chemically castrated and even sent to camps for so-called ‘conversion therapy’. Doesn’t this sound a lot like what has happened to every minority group in history?
We as a community need to keep ourselves informed. We must turn out and vote in elections, and show that we will not be sidelined whether it be over a cake, a hotel room, a kiss or just holding hands walking down the street.

We must always be sure to stand up for our rights.