The kiss between EastEnders characters Ben Mitchell and newcomer Paul Coker reminded us how far British TV has come over the years, and how far it has to go.

With soaps featuring LGBT characters, shows like RuPaul’s Drag Race becoming a worldwide phenomenon and a same-sex couple set to dance on Strictly the landscape of TV has never been so inclusive.

Before we got to this point though, there was was Colin and Barry on EastEnders – the first major gay couple in British soap history.

Homophobic headlines branded them ‘evil’, ‘poofters’ and ‘scum’, and they were even assaulted in the streets. 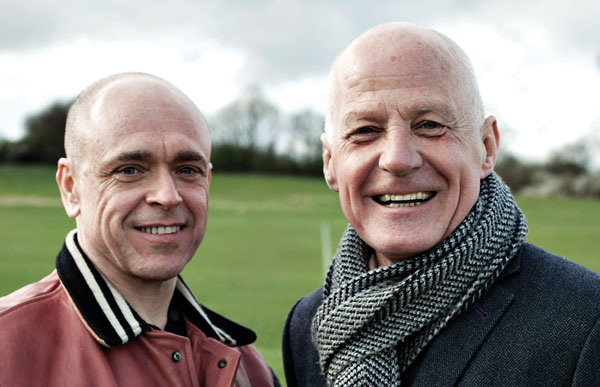 Have you both stayed in touch over the years?

Gary: We did until I lost all my phone contacts ten years ago. One of the many jobs I do is drive a black cab in London, because sensibly, as an actor, you need something to pay the mortgage. One night I picked a couple of guys up and as we were driving along, slowly the penny started to drop it was Michael and his partner. So I started giving them hints as to who their driver was.

Michael: He made me work before I got it right. It was so brilliant, better than anything we could’ve organised. Gary refused to accept a payment and as I left, I tried to hug him through the window. Anyone who went past must have thought, “That bloke’s trying to give Barry from EastEnders a homophobic bashing!”

Michael, what were you told about Colin before you started in EastEnders?

Michael: I got a call to meet EastEnders’ producers, who told me Colin was gay and a graphic designer; his boyfriend’s called Barry and they showed me the storyline for the next two years. I had to talk to my partner Paul and my family because, at the time, the media representation of anything gay was frenzied and hysterical and all wrapped up in AIDS, or the ‘gay plague’ as they called it. I knew as a gay man the press would intrude on my life, so I needed my family to say yes too. They did, and it wasn’t long before the onslaught started.

Were you nervous about what was to come?

M: I was aware of what could happen, but I parked it in my head. Then someone tipped off the press and before I’d even been on screen, a headline in The Sun read ‘EastBenders.’ The News of the World asked to do my life story for £15,000 and I said no thank you. But I was more nervous about getting the job right than the reaction a gay character would get. I was playing a working class older man with a younger lover who, at 20, was under the legal age of consent, which broke taboos.

Four months later, Barry joined Albert Square. As a straight man Gary, did you have reservations about playing a gay character?

G: Like Michael, I met with producers and they told me I needed to go away and think about it. My dad and my brother said, ‘You’re not going to do it are you?’ and I didn’t understand why. It didn’t occur to me it would be a problem, I thought of it as just a job. I’d been acting since I was 11 and had been around gay people all that time – I only found it strange that other people thought of gay people as unusual.

What was the reaction when you first appeared on screen?

G: There’d been crap in the press that I’d ignored, but then the day after I first appeared, I left the house and the builders on the opposite side of the road started hurling abuse at me. Before that we’d had weeks of friendly banter, so that was my wake-up call. I laughed, but it was kind of scary how they could change their whole view of me.

M: People saw the ordinariness of the relationship as a threat.

G: But the positive response from viewers who wrote to me far outweighed the negatives. I still get letters to this day saying it was us who became the reason they came out, which is amazing. 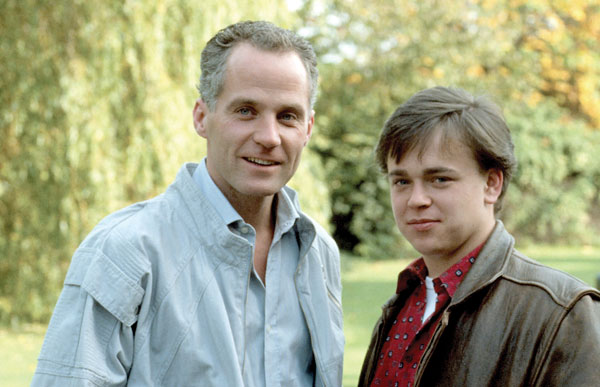 How did the gay community treat you, Michael?

M: Well for the first three months, you didn’t know if Colin was Arthur or Martha until he slipped up to Angie Watts. That moment around the country there was a collective scream from all the queens going ‘We knew! We knew!’ But the gay community was really positive. There was some flack from the gay media who complained Colin was ‘so middle class’ but I think they loved Barry because he was more fun and in your face.

How did your straight friends react to you playing a gay man, Gary?

G: A couple of people were slightly negative about it, but I didn’t give a fuck.

M: I’ve never asked you this Gary, but being gay and playing a gay part was easy. Was it harder for you?

G: No, because I wasn’t representing anything that was personal like you were. I could detach myself from the character. We lived in a time when it was okay to gay bash and it still is the last acceptable prejudice, to be homophobic. And I’ll always pick someone up on it if I hear them say something homophobic.

What kind of abuse did you receive from the public?

G: I was in a car at a petrol station when a pissed guy started saying some homophobic shit to me and banged on my window. I closed it, but he opened the car door and the next thing I know, he had his hands around my throat. I couldn’t breathe but I managed to get my leg between us enough so that his hands came off my neck, so he went for my eyes and took a little nick out of one of them. I pushed him into the backseat and the car – which was moving by then – crashed into some bushes. I got out and grabbed a crow bar from the boot. I wanted to kill him. But he walked away and as luck would have it, a police van pulled into the station, so I reported it. The attacker had dropped his diary in my car so they had his work address. It turned out he was doing a sensible job earning £40,000 a year, but after he was arrested, he was sacked and pleaded guilty to an assault charge.

M: They’d shout at me from building sites and I had a brick thrown through my window that day the News of the World printed my home address. Once I walked though Sloane Square and this voice shouted at me, ‘AIDS carrier.’ I turned around to see a guy being beaten by his girlfriend for saying it. Later I had another couple of bricks through the windows and my car was scratched, but apart from that, the public was mainly good.

G: There was a national uproar. But when I read in the script there’d be a kiss I don’t remember giving it much thought.

M: There were questions in Parliament as to why this was happening on a family show with AIDS and HIV in society. There were headlines in newspapers with words like ‘filth’ and ‘poofter.’ I was staggered to learn years after I left that they kept all the worst letters sent to EastEnders away from me. That was mad because knowing what people think makes you stronger when you’re out on the street; not knowing makes you more vulnerable. I was even put on the National Front’s hit list – if you attacked me, you’d get points for it. It was interesting being in the middle of a storm and not realising it.

Michael, was it important to you that Barry was under the age of consent, which at the time was 21, so it highlighted the differences in the equality of gay and straight relationships?

M: No, it was just a good story that what Colin and Barry were doing was illegal. It was a brilliant way of getting something on to the screen that a lot of people wouldn’t have been aware of. Only once did I fall out with the BBC, when Barry came out to his dad, who then stormed out of the Queen Vic and I wanted to hug Barry because that’s what Colin would do. The producer said absolutely no way so I stormed off the set. In later years, concern about external criticism had started to creep in with certain producers.

Colin had a health scare and feared it was HIV, but it turned out to be multiple sclerosis. Was it ever planned to give him HIV?

M: No, it always going to be MS and it was going to be Barry who developed it. Then they thought it would be more interesting if it was the older man who went though this whole paranoia thing, because he’d had a longer sexual history. I’d have been firmly against him having HIV because it would’ve conformed to a stereotype portrayed by the mass media. When Mark Fowler got it, people entered the life of a straight man with HIV who could’ve been ‘one of them’ and not one of ‘the other.’

Why did you decide to leave the soap?

G: I remember the scenes with Barry’s father that Michael mentioned, and then new producers would start cutting and changing stuff and I felt disappointed at the risks we weren’t taking. A lot of things were cop-outs and I lost interest. 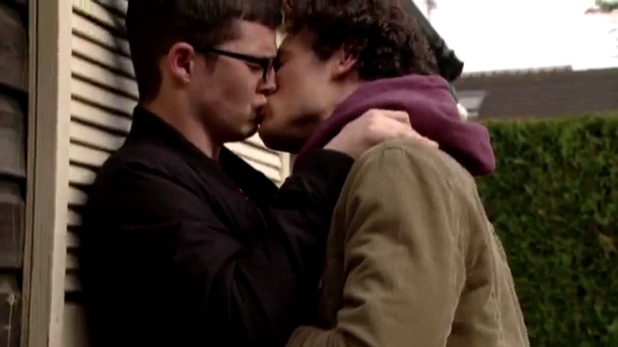 How did playing Barry and Colin affect the rest of your acting careers?

G: I was going to present a kids TV show, but it got pulled at the last minute because the producers didn’t want someone who’d played a gay character. Ironically the person who replaced me was actually gay! But I’ve done tours and shows I wouldn’t have done had I not been in EastEnders, because they liked to use the ‘from EastEnders’ tag. If I could go back and change anything, I would absolutely not; It was a phenomenal experience and I’m now aware of the importance of it.

M: I was up for a lead in the West End musical Me and My Girl, but some key people involved in production said no, it was family show and I was gay and associated with a gay character.

Was there a point after you’d left when you realised how much your characters had changed people’s perception of gay men and same sex couples?

G: I’m constantly amazed when people say that, because it’s not something I give much thought to. It’s only when people bring it to my attention that I spend a few minutes thinking ‘that’s actually really cool, we did achieve something.’ Russell T Davies once wrote an article referring to us and how much we inspired him.

M: I find it incredible when people come up to me and say how much it meant to them. Looking back with a politician’s eye, our characters occurred in a hostile political and media environment. They challenged perceptions and stereotypes in a quiet and ordinary way. If it hadn’t been for Colin, I wouldn’t have founded Stonewall or ended up in European Parliament. There was a real interest in those characters that there wouldn’t be now because our country’s attitudes have changed. But how brilliant it is that we’ve moved on?