Blog
You are here: Home / Blog / Book Reviews / WHEN LOVE COMES TO TOWN 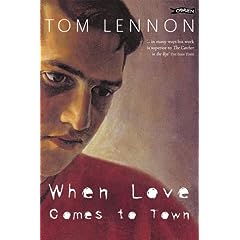 The central figure (hero, if you like) of this story is 17 -year-old Neil Byrne. He is a sportsman and a good scholar. He is implicitly middle-class (his parents incessantly gripe about money, that’s how one knows). His response to the trauma of coming out, or being outed by circumstances, simply does not ring true.

Neil responds to an ad in what’s clearly Hot Press, but aborts actual contact because the other man (the advertiser) is not as appealing as he claimed. Surely an intelligent youth would have noticed ads for Tel-a-Friend, or articles on various Gay campaigns He makeSean intervention on a radio phone-in programme, but doesn’t hang around for the phone number (or numbers) which usually follow such broadcasts. ,
There wouldn’t have been much of a story then, admittedly; but one got the distinct impression, reading this, that we were not dealing with the 1990s (it was first published in 1993) but with the 70s, even ’60s. Master Byrne is just going to experience certain emotionSeand prejudices, whether these ring true or not.

The other characters are rather shadowy, and authorial prejudices show:- sissies (including married transvestites!) are sound; bisexuals-are abused as what people in Belfast called “bendy-tries. “. The blurb claims Neil is “a new type of hero” in Irish fiction, but there are stock characters. The Mother is loving, suffering and forgiving (but,naturally, uncomprehending). The Da’s a bastard – as are nearly all of the heterosexual men, Neil’s fellow students for example. The treatment of the women is a bit off-hand, even slightly misogynistic. Neil’s lover is a grumpy Belfast man called Shane who loves him and leaves him (but not before introducing him to the joys of classical music)!

Tom Lennon (it’s a nom-de-plume [de guerre?]) has his cake of a happy ending, while giving us the full tragic-suicide finale (this happens inside Neil’s head: he is a bit of a Drama-Queen on the quiet). His is a well-made, entertaining natural-ist/realist novel. But one is left rather wishing for something a bit more substantial and a bit more real.

Not everything in this island is rosy for Gay people – young, old, women or men – but l7-year-olds knew in 1993 (and know today) that there iSean infrastructure, built by Gay people, of telephone helplines, campaigning and social groups, as well a sporting and religious ones,bookshops, bars, bistros, saunaSean safer-sex projects. There’s a social group in deepest Fermanagh! Since law reform in the Republic, GCN’s listings have grown t0 include six of the smaller towns.
All of this suggests a dramatic change – which is surely worth writing about.